Why Devex Founder Raj Kumar Dropped Out of Harvard 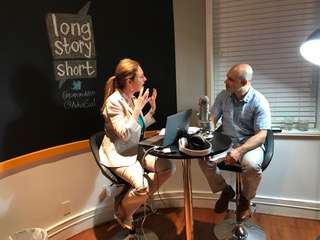 Maybe it’s the story-teller in me, or maybe it’s the 10 year old still inside me who made a website to save polar bears screaming to get out again, but sitting in that interview room with Raj Kumar, the founder and Editor-in-Chief of Devex, made me want to stop everything I’m doing and just …save the world.  At this time in 2018, there are lots of global problems, almost too many to count. I don’t doubt that everyone has a little superhero in them wanting to fix all of the world’s problems as soon as possible. Our longing isn’t what is stopping us. It’s because it’s a path that doesn’t have an obvious finish line that stops people. Raj Kumar and his colleagues were also on a similar path, trying to find a way to make their mere existence have an impact on our world, but with hardwork and dedication, they found the finish line. During a recent Time4Coffee podcast interview with T4C’s Chief Java Junkie, Andrea Koppel, Kumar told us that building Devex took much longer than he had anticipated. He also said it would have been so easy to just stop and give up. But he didn’t, and they didn’t, and now look at them. Devex’s story should teach us that with a healthy mix of passion, smarts and drive, your dreams can become a reality.

Devex began back in 2000 when Kumar was a graduate student at the Harvard Kennedy School and although this is where he would meet the friends that co-created Devex with him, he was really torn about staying. He wanted to use a Kennedy School degree to help him build a career in international development, but he also felt pulled to step into the real world and start building his dreams pronto. Eventually, during his 1st year there, with the encouragement of the Kennedy School’s Dean, he realized he’d already identified a big gap in the international development space and his big idea —  Devex — could potentially fill that gap. So, he had that hard conversation with his parents — you know, the the one where you tell them you won’t have a degree from Harvard after all. Ugh. And then he dropped out of Harvard’s Kennedy School with only one of two years under his belt.

A huge push to dropout of school and start Devex were Kumar’s personal experiences during his childhood. In our T4C podcast interview, Kumar explained that his family were immigrants from India.  He also shared that it was thanks to his fond memories of the work trips his aunt and uncle would take him on to India that helped him recognize the joy and satisfaction derived from working to improve the lives of those living in poor, underdeveloped countries. That is why he decided to make  Devex a social enterprise,  a cause-oriented business, to connect and inform development professionals and aid workers all over the world.

For a long time, the Devex “office” space was a two bedroom apartment (in which they also lived) filled with 8 friends from grad school and someone (truly just someone they found) whom they asked to stand as their CEO. Kumar shares that it took years to move into a real office, but he is so thankful that they stuck it out; the challenges that being in a small space for so long really paid off. It taught them patience, perseverance, and made the success so much sweeter.

Devex has since grown into a global media platform for the entire development community. Today Kumar employs nearly 200 staff to serve a global audience of more than 1 million aid workers and development professionals. Devex is unique among so many other media companies in that its mission is exclusively focused on helping others; a characteristic which was obvious not only from how Raj Kumar spoke of his company, but also from how he, and the rest of his employees, spoke to the T4C team. From their HQ in a quaint older  Washington, D.C. townhouse, to their Happiness & Talent Associates (yes, that’s their job title!), to simply hearing the way each employee talked about his/her mission — it was clear to me just how much Devex is walking the talk. If there is one thing I’d recommend you to take from this post it’s this: listen to your heart and gut to tap into your professional passion, and to your college or university dean, because between their wisdom and your innate intuition, you can’t go wrong.