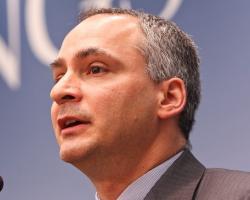 Ben Wittes is the Editor-in-Chief and co-Founder of the Lawfare blog, an online publication dedicated to national security issues, published by the Lawfare Institute in cooperation with the Brookings Institution.  It was started in September 2010 by Wittes, a former editorial writer for the Washington Post, Harvard Law School professor Jack Goldsmith and University of Texas at Austin law professor Robert Chesney. What started out as a fun little project in 2010, quickly turned into a massive news source for those interested in national security law. In 2017, alone, the site had 15 million page views.  A graduate of Oberlin College, where he studied English Literature and Japanese History, Ben tried his hand at writing novels and short stories, but he didn’t feel inspired by that genre of writing. Eventually, he discovered a passion for legal affairs and decided to combine it with his original passion: writing. Want to know more about Ben’s journey and Lawfare? Grab your mug of caffeinated deliciousness and press Play!