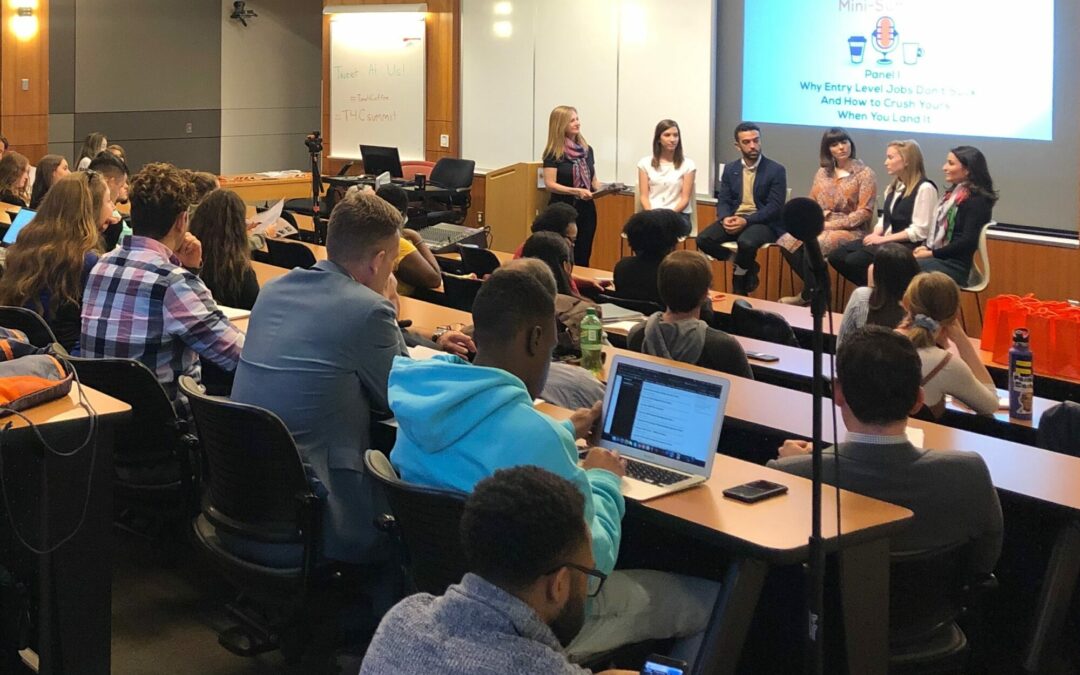 While job prospects for today’s college graduates have improved in the last decade, since the Great Recession of 2008, securing a job out of college remains a challenge for many graduating seniors, like me. According to the National Association of Colleges and Employers (NACE), the nation’s full-time employment rate for recent graduates hovers around 58%.  That means 2/3rd of us remain unemployed or under-employed.

The 90-minute event featured two panels, moderated by Chief Java Junkie Andrea Koppel. The first panel was entitled: “Why Entry-Level Jobs Don’t Suck & How To Crush Yours When You Land It”.

We’ve rounded up the 5 biggest takeaways for you:

Sanam, who started as an Associate in an Executive Assistant role at McLarty, said that her entry-level job gave her the opportunity to sit in on meetings, as well as watch and listen to the way her extremely seasoned boss conducted himself and led a team of 100 employees.

Although Sansam said she was initially hesitant to accept her Executive Assistant role because “she didn’t think it would be fun to do two years of scheduling, planning events and administrative work,” she later realized that no matter how senior a job you have, there will always be aspects of those jobs that are still mundane.

Working as an unpaid volunteer on a political campaign after she graduated from college, Margaret also said that a position even at “the bottom of the pecking order” on a campaign allows you to explore all of the different facets of an organization. In effect, this opportunity empowers you to try on many different hats in a short period of time and work different jobs that you wouldn’t otherwise be able to do in a more established company.

#2) Start Broad, Then Narrow: Ali Breland, Disinformation Reporter at Mother Jones, and Lauren Boas-Hayes, Threat Intelligence Analyst at Facebook, noted that entry-level jobs often help you identify and paint a clearer picture of your professional interests, leading you to your next role.

For example, Ali said his entry-level job writing on the technology beat for The Hill gave him an overview of many different aspects of technology, and although he didn’t enjoy all of them, the breadth of assignments helped him figure out what side of the tech beat he wanted to pursue in his next job.

Thus, Ali found that beat at Mother Jones where he was recently hired as a Disinformation Reporter — a beat that encompasses everything from Russian trolls and conspiracy theories on social media to tech surveillance and artificial intelligence bias.

When Lauren realized six months into a two-year project that she couldn’t see herself continuing the work for another year and a half, she had a conversation with her boss in which she had the opportunity to advocate for herself and speak up about the projects that excite her. In turn, the conversation helped her grasp that she wanted her next job to be somewhere that allowed her to focus full-time on threat intelligence for a single client, which is exactly what she does now at social media giant Facebook.

#3) Get Job Experience First, Wait on Grad School: For java junkies who might want to pursue higher education, Sanam, Margaret and Lauren said entry-level jobs can also help shape and prepare you for graduate school.

Stressing the importance of knowing what you hope to glean from an advanced degree, Sanam said working at a consulting firm like McLarty Associates will introduce you to all kinds of clients and challenges. This exposure will assist you in narrowing down what skills you may be lacking, and how a master’s degree could train you to be a more knowledgeable professional in your field.

Building on Sanam’s point, Lauren said advanced degrees can be a helpful way to position yourself for the next stage of your career. In addition, Margaret highlighted that working in the ‘real’ world will strengthen your application because you’ll have a story to tell about your post-college experiences and the skills you’ve acquired on the job.

#4) Develop Grit: Ali brought up the importance of cultivating grit in order to land your desired entry-level job.

Ali shared that during his time at the University of Texas, he applied to NPR’s internship program every summer after his sophomore year. The hiring managers noticed Ali the third time he applied and offered him a final-round interview for “All Things Considered”, but he still didn’t get an offer. After graduating, Ali refused to give up and applied a fourth time, which turned out to be the magic number, and he finally landed the internship.

Though he credits some of his success with the NPR internship to “luck,” Ali said it was his grit that “put him in a position to get lucky” and encouraged all young professionals to do the same.

#5) Work Hard, Play Later: Emily Schaefer, a Policy Advisor at nonprofit global humanitarian and development organization Mercy Corps, offered yet another piece of wisdom on how to maximize internship and entry-level job experiences.

Even though she started as an unpaid intern at Mercy Corps right out of college, Emily so impressed her supervisor, Andrea Koppel, that she was hired as Andrea’s Executive Assistant and Office Administrator — a job she held for three years. She was then promoted to Associate Policy Advisor and a year later, to Policy Advisor for Mercy Corps’ Policy & Advocacy team.

After her promotion, Emily started vetting applications Mercy Corps internships — the same track that helped her get her foot in the door — and also managed a group of summer interns.

According to Emily, the key to getting an A+ on your internship is to demonstrate a passion for learning. For example, she said that she stayed after hours every day to get a closer look at how the company operates and she and her full-time colleagues pay special attention to the interns who do the same. When you finish a task, Emily said you should keep asking your supervisor for more tasks and new ways to help and learn.

For best practices on landing an internship or entry-level job, Emily stressed that your resume must be completely error-free and your cover letter should tell a compelling story as to why you are really interested in that industry. “Applications with no cover letter are going out the window,” Emily said because it is clear to her they didn’t follow the instructions included in the job posting.

Eager to learn even more from Sanam, Margaret, Lauren, Ali and Emily? Tune into the CCS livestream on the Time4CoffeePOD Facebook group!