Top 5 Hacks: How ‘Failing’ Can Level Up Your Professional Quest 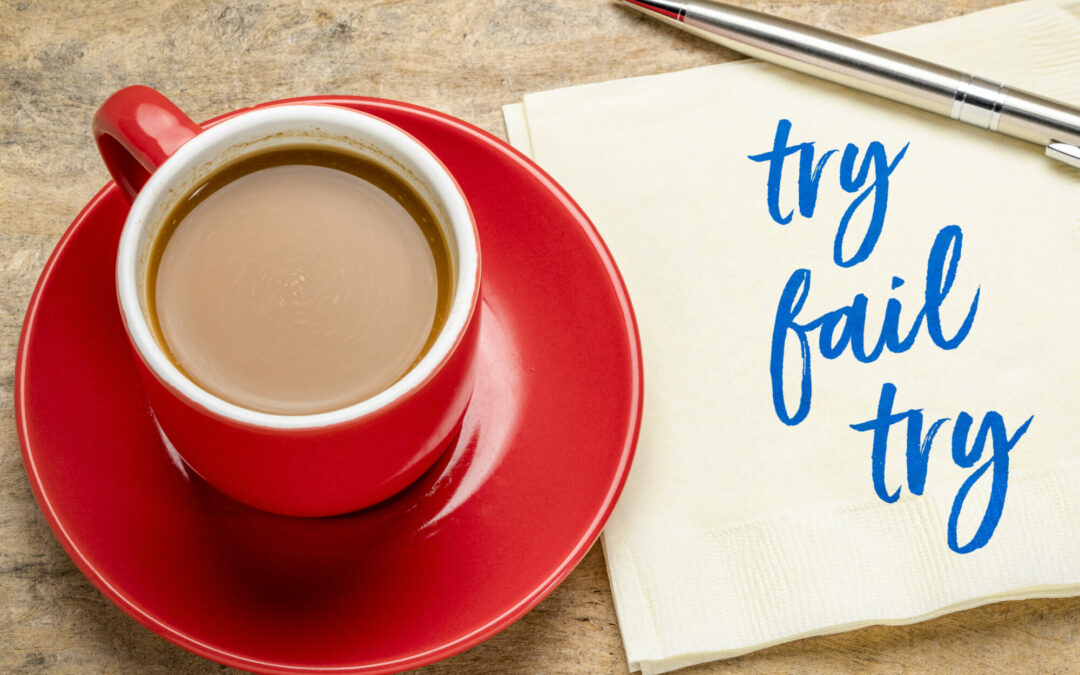 Failure, to most, seems like one of the harshest seven letter words out there. Falling far short of your goals can be a terrible feeling. But when you go off the cliff, or face plant, it is crucial to look at those moments as opportunities to grow. Not accomplishing a certain goal, can provide many insights, which can later help fuel future professional achievements!

Don’t believe me? Well, take it from some of our super successful Time4Coffee podcast guests. Below are the top 5 hacks as to why failing can actually be a good thing.

1) IT BUILDS RESILIENCE. Jason Wachob, founder of Mindbodygreen, fell down twice and got back up again, and again! After his first two start-ups failed, he was able to use the lessons he learned to improve his 3rd attempt at start-up success. During his T4C interview, he noted that he now wakes up each morning and says: “This is it. I love this!” After suffering two professional face plants, and also re-injuring his back (he’s 6’ 4”) from all the frequent flying he was doing in cramped economy seating, he decided to try yoga instead of surgery. That’s when  Jason discovered his true passion and found the right business model. Today Mindbodygreen is a leading independent lifestyle brand dedicated to wellness.

2) IT FUELS CREATIVITY.  Daniel Sieberg, CEO and founder of iO Enterprises, is all too familiar with what failure feels like. In the wake of a divorce and losing his job, Daniel entered a painful period filled with loneliness. In his T4C interview, Daniel explains how extreme loneliness sparked his creativity and led him to found his start-up iO Enterprises which uses A.I./ A.R. technology to help people in dark emotional places.

3) IT PUSHES YOU OUTSIDE YOUR COMFORT ZONE.  Following decades as a successful Hollywood and Broadway casting director, producer and writer, Jane Iredale began to experience professional burnout after a big play she was working on flopped.  In her T4C episode, Jane says she noticed that most of the actors she worked with hated the pancake makeup they had to wear because it damaged their skin.  As she tried to think of something meaningful to do outside of Hollywood and the theatre she asked herself: “what’s wanted and needed?” Jane wanted to create something that would help women feel better about themselves. One night Jane had an epiphany — even though she knew nothing about cosmetics, she decided to figure out how to create a makeup line that would improve skin rather than damage it. That’s how the idea for Iredale Mineral Cosmetics was born.

4) IT MAKES YOU BRAVE.  Everyone is scared of something. When Mark Metry was a boy he was afraid of social settings, especially at school.  He failed to make friends mostly for reasons outside his control. After 9/11 Mark, who is Egyptian-American, found himself targeted by kids in school because he looks Arab.  To escape the pain of loneliness he sought refuge in video games where he didn’t have to worry about people knowing his heritage. In his T4C episode, Mark talks about how he broke out of his “socially anxious prison” by following his interests into video gaming. When he was 12 years old he started a hit Youtube channel focused on Call of Duty.  Today Mark is a successful podcaster and founder of VU Dream, a marketing agency focused on virtual reality and mixed reality worlds.

5) IT FUELS OPPORTUNITY. Sree Sreenivasan, the first Chief Digital Officer for the Museum of Modern Art (MOMA) in New York City, was suddenly fired in June 2016. Instead of hiding at home and gorging on Ben & Jerry’s, Sree embraced his failure in a very public way and sought out help on social media. In his T4C interview, Sree talks about asking his followers for job ideas and leads after he was fired.  He received a whopping 1,200 suggestions! After realizing the true power and practicality of social media, Sree saw an opportunity unfold right before his eyes. Today Sree is the co-founder of Digimementors, a digital agency designed to help brands become “smarter and better” on social and digital. Sree leaned on social media in a time of desperation, and later used it to fuel an entirely new endeavor!